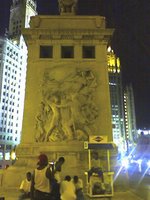 Young men hang out by (I think) the Michigan Avenue bridge over the Chicago River.

I think the Tribune building is in the background.

Have you seen these David Zucker ads?

The Left Hopes for Intolerance

Look: I loathe the closet. I despise the hypocrisy in the Republican party. But a witch-hunt is a witch-hunt. If the gay left thinks it will advance gay dignity by using tactics that depend on homophobia to work, that violate privacy, that demonizes gay people, then all I can say is: they are wrong. They will regret it. It will come back to haunt them. And they should cut it out. The fact that their motives might be good is no excuse. Everybody on a witchhunt believes their motives are good. But the toxins such a witchhunt exposes, the cruelty it requires, and the fanaticism of its adherents are always dangerous to civilized discourse. What you're seeing right now is an alliance of the intolerant: the intolerant on the gay left and the intolerant on the religious right.

It seems more like the intolerant left hoping for intolerance in the "religious right."

"[O]uting fever" among the activist left is very distasteful... It looks very hypocritical coming from people who've spent the last several years warning about Republican threats to privacy, and it also bespeaks an unprincipled hunger for victory and power at any cost.

The difference [between 1950's McCarthyism and today's] is that the Democrats doing the persecution today can't fire gay Republicans directly; instead they are tracking them down and exposing them in the hope that the Republicans will be bigoted enough to fire them. Unfortunately, this has failed. Even Rick Santorum, supposedly the worst gay basher of the lot, refused to fire his gay aide after the man was outed.

What this has created is a huge (if ironic) double standard between the parties.

I wonder what those who oppose "incredibly seedy campaign[s] of prejudice, hatred and fear," who decry those they perceived as having "campaigned - campaigned - on further ostrosizing [the gay and lesbian] community," think?

Update: Ponder the extortion angle, too.

Brains or Heart (or Both?)

From The Wonderful Wizard of Oz, by L. Frank Baum, via John Eldredge (p 38):

Dorothy and the Scarecrow had been greatly interested in the story of the Tin Woodman, and now they knew why he was so anxious to get a new heart. "All the same," said the Scarecrow, "I shall ask for brains instead of a heart; for a fool would not know what to do with a heart if he had one." "I shall take the heart," returned the Tin Woodman; "for brains do not make one happy, and happiness is the best thing in the world."

Though happiness isn't necessarily my goal, may each enjoy its place. 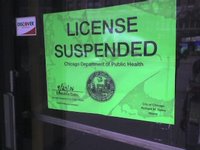 This north-side restaurant was shut down by the Chicago Health Department.

Ok, not unique to Chicago, but something you don't see every day.

Fortunately, I never ate here. But I've eaten in places that looked similar (sans this sign). 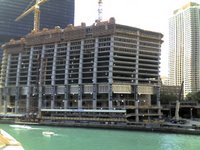 Not sure why the lines are wavy in this one. Must have been the camera. (It's not just your imagination.)

Update on the Federal Budget Deficit

The Mark Foley micro-scandal can't change the fact that the American economy is going great guns. The 2006 budget deficit figures were just released, and the deficit is not only getting better, it is now relatively small by historical standards.

Why is the deficit down?

So cutting taxes to stimulate the economy really does work.

Let's see, GDP growth is strong, productivity is way up, unemployment is low, family incomes are rising, inflation is down, the stock market is up, and the federal deficit is down. Yet polls show that we are about to put more Democrats into both the House and the Senate. That should fix all of these economic problems, real quick.

From my post on China's Lost Girls, I received this heads-up:

I've found through Google that you were quite passionate in a statement on your website about the Dying Rooms documentary.

You asked, "I'm baffled by all the tip-toeing around this brutal Chinese government. Who will call it what it is?"

Well, author Talia Carner is such a lone voice. In her new novel we've just released, CHINA DOLL, she touches this very important issue of infanticide in China. I would like to invite you and your readers to visit the author's website for a lot of background information about this issue. www.TaliaCarner.com. And of course, to read this suspense novel that, according to a reviewer is "a substitute for Dan Brown without the guilt of not schlepping to the beach War and Peace."

Talia Carner was hailed for her first novel, PUPPET CHILD, as "an author with the power to change society," and one who "changes the world one child at a time."

She hopes to reopen the debate and awareness of the killing of one million baby girls in China each year.

Thanks for letting me know! Thanks for helping bring the public's attention back to this massive, quiet injustice.

Willow Creek Community Church kicked off their Chicago congregation this morning. We decided to check it out. They met downtown at Roosevelt University's Auditorium Theater.

It was very Willow: huge, pretty polished, pretty well organized. Seems to be a mega-church in the making. What you'd expect from Willow Creek (and I mean that in a good way, though a mega-church isn't our cup of tea).

The auditorium was packed. We wound up in the 3rd balcony--the main floor and first two balconies were out of space. Our level eventually filled up, too.

They did kind of a music/dramatic-monologue, singing Bring Me to Life and talking about learning to feel again. I thought it was pretty powerful, but I was taking in the whole experience at the same time (huge crowd, cool to see what God's doing, that kind of thing).

Bill Hybels gave the message. He had a lot of good things to say. The topic: "Is this church?" (A question both we and God ask.) When he came out, before he said his first word, he got a standing ovation from about a fifth of the auditorium. I thought that was a bit strange. I suppose they know him and like him. I know him a little (and like him).

The worship team was ethnically diverse. They're clearly making an attempt at creating a service that's welcoming to a broad range of city dwellers, but the music had a Willow Creek feel (i.e., mainstream suburbia). My wife thinks it will be interesting to see if the worship team is able to fully engage multiple cultures into worship for the long haul.

These pictures are lousy, but might give you a tiny glimpse. They're taken from our seats. 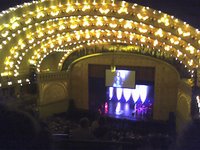 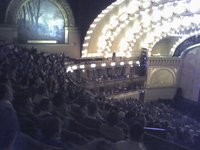 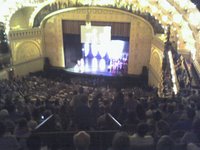 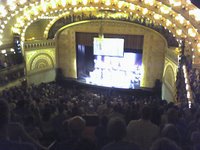 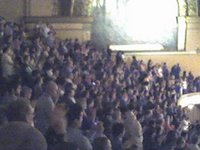 Welcome to the city, Willow! Though I think the last thing this world needs is yet another church, the first thing it needs is another community of people reaching out to others, loving one another, and following Jesus.

P.S.: Sunday, October 15th Bill Hybels interviews U2's Bono. (Update: By the way, I think it's a videocast, and I don't think it's live.)

One more impression: the service didn't go as long as I expected it to, but is that just my perception?