Dwarfed by skyscrapers, St. Peter's in the Loop stands in marked contrast to its surroundings. 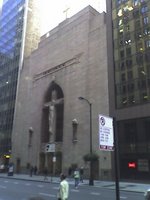 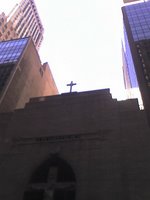 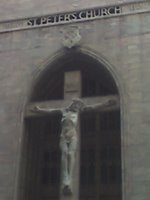 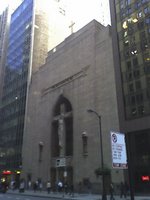 Amir Taheri in the London Times (via Austin Bay):

Those familiar with Iraq know that the real war for its future is waged in the United States and, to a lesser extent, Britain. The terrorists have no hope of riding in triumph into Baghdad, but they continue to fight to persuade US and British opinion that the war is lost and that new Iraq does not deserve further support.

In other words, when terrorists murder a group of civilians, they're really targeting you.

I'd be surprised if they didn't study U.S. opinion polls like generals study enemy troop movements, and measure the effect of everything they do against them.

As one person put it, "terrorism is an information war disguised as a military conflict."

Too many Democrats have invested too much in the hope that Iraq fails for them to agree to help Mr Bush to ensure success.

The whole thing is worth a read.

Thanks for risking your lives to try for a representative government. Bye!

But they're consulting military experts!

"Based on the advice of current and former military leaders, we believe this tactic would be a serious mistake," Reid said in the Democratic radio address Saturday.

What are their experts' strategy?

Instead, Reid and Pelosi want Bush to begin pulling troops out in four to six months.

I am going to suggest that democratic politics is a very poor information-processing mechanism. The great mass of people form their political beliefs with little regard for facts or logic. However, the elites also have a strategy for avoiding truth. Elites form their political beliefs dogmatically, using their cleverness to organize facts to fit preconceived prejudices. The masses' strategy for avoiding truth is to make a low investment in understanding; the elites' strategy is to make a large investment in selectively choosing which facts and arguments to emphasize or ignore.
...
Ignorance is Blissfully Cost-Effective

...there is no particular reason for citizens to make a large investment in learning facts or forming coherent beliefs about political issues. The low probability that your vote will make a difference makes for an adverse cost-benefit calculation from obtaining information.

He goes on to look at the idea that in spite of all this, there's the tendancy for crowds to have a collective wisdom. He doesn't reject that outright (that I can tell), but seems kind of down on the idea.

More on the elite:

In May, 2005, the ombudsman or "public editor" for the New York Times, Dan Okrent, wrote

Op-Ed columnist Paul Krugman has the disturbing habit of shaping, slicing and selectively citing numbers in a fashion that pleases his acolytes but leaves him open to substantive assaults.

Krugman uses what I call a high-investment strategy for avoiding truth. He puts considerable effort into emphasizing facts and arguments that support his overall position, while ignoring conflicting evidence. However, in this regard, he is far from atypical as an opinion leader.

His conclusion isn't too cheery:

The more knowledgable we are, the more we follow a high-investment strategy of selectively accepting evidence that favors our outlook while discounting contrary information. In science, this process ultimately is checked by the methods of experimentation, prediction, and falsification. In markets, it is checked by the process of profit and loss. In politics, the checks are less powerful. Our political beliefs are likely to be especially unreliable, regardless of which strategy we use to avoid truth.

He makes reference to an interesting (to me) new blog called Overcoming Bias.

I find this article interesting because understanding my (and others') biases helps correct them.