Though I disagree with some of the author's views, I think the distinction between 'proxy' and 'civil' is an important one.

We're no fans of the war in Iraq. As we opined nearly a year ago, it's time for the United States to leave. Saddam Hussein was ousted, captured, tried, convicted and soon will pay the ultimate price for his crimes. And if our goal truly is Iraqi "self-determination," well, there's no time like the present. Iraq must step up to the plate.

That said, some "experts" and many media outlets seem to think they can nudge the process along and further turn the American people against the war by calling the exploding sectarian violence a "civil war." The thinking appears to be that, branded as such, Americans will have no stomach for fighting the proverbial "somebody else's war" and demand our withdrawal.

The Bush administration disputes the "civil war" moniker. And it's not a semantic argument. Just Tuesday, The New York Times reported that "the Iranian-backed group Hezbollah had been training members of the Mahdi Army, the Iraqi Shiite militias led by Moktada al-Sadr." It's not the only outside influence.

Such a proxy war is not a civil war. Neither is it unreasonable or naive to believe that sans those proxies, Iraq might not be the hellhole it now is. Nonetheless, this remains a matter for the Iraqis to settle.

Though I agree that "Iraq must step up to the plate," what does our withdrawl do but empower these proxies (Syria and Iran) and reward the murder, mayhem and subterfuge they're bringing?

Via Instapundit, who adds:

Yes, and they're the proxies of Iran and Syria. These people are not our friends.

Update, 11/30: In case there was any doubt, "incontrovertible proof now exists of Iran's material assistance to Iraqi Shiite forces:"

U.S. officials say they have found smoking-gun evidence of Iranian support for terrorists in Iraq: brand-new weapons fresh from Iranian factories. According to a senior defense official, coalition forces have recently seized Iranian-made weapons and munitions that bear manufacturing dates in 2006.

Iranian-made munitions found in Iraq include advanced IEDs designed to pierce armor and anti-tank weapons. U.S. intelligence believes the weapons have been supplied to Iraq's growing Shia militias from Iran's Islamic Revolutionary Guards Corps, which is also believed to be training Iraqi militia fighters in Iran.

If you're not familiar with it, Google Book Search is striving to scan the entire contents of every single book ever published, so you can search them like you would the web.

Only Google will know, since exhaustively searching everything for anything else isn't feasible. But I'm sure some (as mentioned in the article) will search at least the most famous works.

While I have my problems with Google, I think this is an excellent endeavor (and not just to find plagiarism). 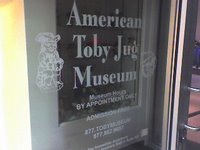 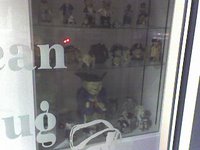 "The American people have put their feet on the right path by ... realizing their president's betrayal in supporting Israel," the terror leader said. "So they voted for something reasonable in the last elections." He did not explain his logic.

Do the Democrats feel at all sheepish at having their victory hailed by al Qaeda? Do they feel any pressure to demonstrate to the American people that they are not a de facto ally of the terrorists? Not as far as we've noticed so far. But when the Democrats stop celebrating, they may want to pause long enough to consider a simple question: Why are the terrorists so happy that they won?

Terrorism is an information war disguised as a military operation.

The Republicans took an ugly beating yesterday in the elections.

I've been too busy to blog much, but I suppose I should reflect a little.

I'm not happy about it. Plenty of reasons for concern. Ironically, most of the Democrats elected are more moderate than their Congressional leaders.

But not the end of the Republic. No plans to move to France or Canada. I won't accuse Democrats of brain-washing, being Nazis, etc. (Don't forget that I do think that our culture has been trying to brain-wash us in general for decades--mostly towards hedonism.)

Everybody's claiming to speak for the electorate. I won't presume to (at least too carelessly), and might scrutinize some such claims (when I have the time).

That's all I have time for now. Cheers.

NYTimes: Saddam was on the Verge of an A-Bomb

Via TKS and Powerline: the NYTimes, while bashing Bush, says:

Experts say that at the time, Mr. Hussein’s scientists were on the verge of building an atom bomb, as little as a year away.

The article attacks Project Harmony, which is a name you should know. That project published a large volume of documents found by our soldiers in Iraq. Those documents have gone a long way in refuting the "no ties to terror" and "no WMD" claims.

An intersting twist, too, for the Times, who seem to publish any secret they can get their hands on.

It would be interesting to have a nuclear physicist independently review the specific documents the Times sites, to see what information may have really been compromised.