Lighted tree and the sculpture at the downtown Post Office. (I'm calling them winter scenes since it's after Christmas.) Enjoy. 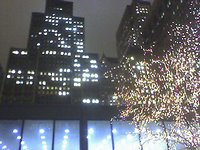 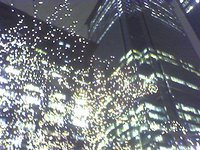 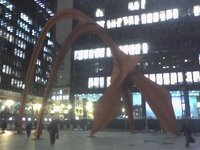 The Enemy in Iraq

Time for another round of Know Thy Enemy:

Ponder your opinion of these people's actions.

Space is so limited that some use their car for storage. This car is so full of stuff there's no room to drive it. Packed literally to the ceiling, parked right on the street. Bonus: the high-rise's reflection. 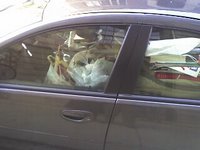 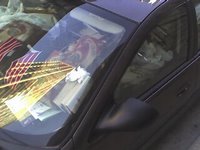 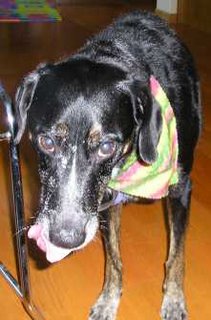 The Hound of Scrutiny licks its chops.

The House Permanent Select Committee on Intelligence is studying 12 hours of audio recordings between Saddam Hussein and his top advisers that may provide clues to the whereabouts of Iraq's weapons of mass destruction.
...
"I still believe there are key individuals who have not been debriefed and there are key sites that have never been investigated. I know there are 35,000 boxes of documents that have never been translated. I am frustrated," Mr. Hoekstra said.
...
"I am trying to find out if our postwar intelligence was as bad as our pre-war intelligence, " Mr. Hoekstra said.

Update, 2/15: Jack Kelly summarizes the evidence to date that Saddam sent his WMD to Syria.

Perhaps related: Jordan, Syria's neighbor, sentenced 11 terrorists, including Syrians, over their attempted chemical weapon attack. No word on where they got the chemicals (and no journalistic interest, either). "After the sentencing, the convicted men turned on one of the acquitted, a Syrian, and accused him of being an informer."

President Bush has ordered the vast quantity of documents and tapes captured by U.S. forces in Iraq to be made public. Based on what has been revealed already, a lot of people owe him an apology.

...President Bush has ordered the release for public analysis of more than 3,000 hours of audiotapes of Saddam Hussein

... in the 12 hours of tapes revealed so far is documentation that Saddam had active WMD programs and conspired to deceive weapons inspectors, hiding them and then spiriting them out of the country with Russian help.

In short, they are a damning indictment of the "Bush lied" crowd and a total justification for Operation Iraqi Freedom.

The recordings released so far show how Saddam was hiding his WMD from weapons inspectors. They also show the Iraqi dictator discussing previously unknown plans for enriching uranium.

Great film. Just watched it tonight. Full disclosure: I haven't seen Moore's crocumentary, and have no real plans to. I've read enough reviews to get the idea. If you saw Farenheit 9/11 and thought it had substance, see this one and tell me how it stacks up.
By The Scrutinator @ 9:57 PM  ::  1 comments

We Are All Danes Now

In case you haven't heard, a series of cartoons critical of Islam, published in a Denmark paper, are causing outrage around the militant Islamic world.

What we're seeing is the clash of civilizations. Western civilization values (supposedly) free speech, and allows disagreement and criticism without bloodshed. Barbarism doesn't.

Which do you choose? What are you willing to pay for that choice?

Many are upset with the US State Department for saying, essentially, "we don't want any trouble, ok?"

Many, like blogger Atlas Shrugs, have been sounding the clarion for some time. Her tagline: Western civilization hangs in the balance. ... Get your heads out of the sand and Fight the Great Fight. The Jew may be the canary in the coal mine, but you my friends will be the next. If you're not part of the solution, you are the problem. See her reporting.

Blogger Gates of Vienna: At the siege of Vienna in 1683 Islam seemed poised to overrun Christian Europe. We are in a new phase of a very old war.

Way too much to read, but here's a smattering.

Update 2/8: Apparently, the cartoons were printed in an Egyptian paper back in October: "during Ramadan, for all the egyptian muslim population to see, and not a single squeak of outrage was present."

File under double standards: NPR's Daniel Schorr: "Maybe a cartoon that may inflame millions should be described but not shown." (From the intro page: "In times of tension, First Amendment rights may give way to other interests.") Really? Where was his voice of caution when the Abu Ghraib photos, meeting his criteria, were being published?