Simple rules for making a fool of yourself on the Internet

A must-read from the always-entertaining James Lileks.

Make Up Funny Names. If a right-wing figure's name starts with K, like Kate, by all means call her KKKate. ... Boil down the object of your hate to a single phrase that betrays your incomprehension of the fundamental issues, but lets others know where you stand right away.

Read the whole thing for good perspective and a dose of healthy skepticism towards union dealings.

Most of the commentary on the ongoing propaganda campaign against Wal-Mart ignores what is probably the most important aspect of it: It is primarily a labor union-inspired campaign against Wal-Mart employees, as well as the company in general. This is the essential truth of all union organizing campaigns. Historically, all of the violence, libel, and intimidation that goes along with "organizing campaigns" has been directed at competing, non-union labor, not management. The Wal-Mart campaign is no different.

Wal-Mart's recent news, in case you didn't hear, is the way their new Chicago-area store (blocked from Chicago proper by an alderman) received 25,000 resumes for 325 job openings. In other words, the alderman blocked one store, but instead should have encouraged 76 of them.

You know, to me Wal-Mart is a lot like George W. Bush. It's not that I'm that big a fan in the abstract, really, it's just that the viciousness and stupidity revealed in its enemies tends to make me view it more favorably than I otherwise would. 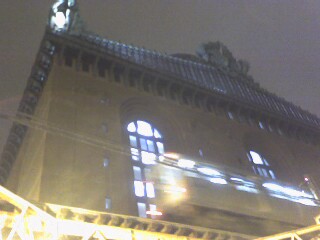 An "L" train whizzes past the Main Library in downtown Chicago. "L" or "el" is short for "elevated." The train is a couple stories above the street.
By The Scrutinator @ 12:14 AM  ::  0 comments 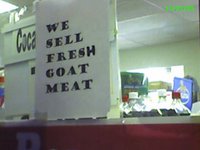 The sign reads "We sell fresh goat meat." I saw it in a shop's window and had to ask. Who buys fresh goat meat and why? Is this a religious thing? Cultural? Just another kind of meat? The guy didn't speak much English and got a little defensive: "We sell all kinds of meat! All kinds!"

I get a laugh out of Comedy Central's Colbert Report and Jon Stewart's Daily Show.

But just from watching, one doesn't get much of a perspective on their guests. In the spirit of looking closer and thinking harder, consider these:

Colbert Report, 1/3: Craig Crawford of MSNBC and CQ. RightWingNutHouse and PowerLine look at some of his writing.

Daily Show, 1/10: James Risen, New York Times author of the NSA wire-taps story (and his well-timed book), triggering an avalanche of discussion on the blogs. Some facets:

1/11: Peter Bergen, CNN Terrorism Expert. He contributes to a variety of media outlets, including the hard-left Mother Jones and pretty-far-left The Nation magazine. Even so, he seems reasonably well respected across the political spectrum. On tonight's Daily Show, Bergen suggests that our invading Iraq was Bin Laden's "Christmas present." I think Bergen's school of thought is that devout Bin Laden hated secular Saddam Hussein. That school of thought is presently being shaken by what we're finding in Iraq: at least 8,000 radical Islamic terrorists trained in Iraq from 1999 to 2002. Thomas Joscelyn is understandably critical.

1/16: Eugene Jarecki, director of "Why We Fight" (I didn't see this segment). Clive Davis wasn't impressed by it. Time magazine says "the documentary[-producing political] left is back in the Iraq business with Eugene Jarecki's Why We Fight ... The film is, of course, a handbook for the converted. Those in agreement will see it, those opposed will ignore it. That is the fate of political documentaries in an age when the left mostly talks to itself." (I'm glad to watch it myself and review it if anyone's really interested.)

1/18: Hats off to James Woolsey, former CIA director. Had some good things to say. Jon Stewart mentioned in passing, "I know you think we're in World War 4..." Indeed some of us do. Woolsey took part in a teach-in at UCLA.

1/30: Bernard Henri-Levy gave an interesting interview on 1/26. Here's a review of his time on C-SPAN with Bill Kristol, by the Powerline folks.

Message of the Day 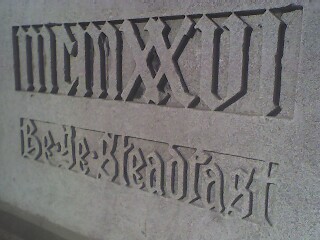 Like many families, ours has a political divide. During Christmas dinner, conversation turned briefly to politics and my blog. My brother showed my cousin my blog on his PDA.

My cousin asked: "So why do you blog?"

Me (after some thought): "How do you decide who to vote for?"

My cousin: "That [question] is your answer?"

"That's the beginning of the discussion."

I'd like to write more about why I blog, and I'd like this blog to be about much more than politics. It's on my list of things to do.

The question: How do you decide who to vote for?

My brother's facetious answer: "Whoever minimizes my taxes, leaving me the most money."

Is there a more serious answer here? Caricatures of the other side? Our arch-conservative mother reinforces some, but her views are more fringe than representative. And attacking a caricature is the classic straw-man fallacy.

I want to be careful here: a lot of comedy is caricature, and I enjoy it too. (The Simpsons, South Park, The Daily Show, The Colbert Report.) But I want to keep in mind that Amos & Andy was a caricature, too.

A few other random remarks from my cousin:

I appreciate the feedback.

Despite our differences, it was great hanging out with family!

[AP:] Lobbyist Jack Abramoff pleaded guilty Tuesday to federal charges of conspiracy, tax evasion and mail fraud, clearing the way for him to cooperate in a massive government investigation of influence peddling involving members of Congress.

[Christian Science Monitor:] Federal campaign records show that about 220 members of Congress received some $1.7 million in political contributions from Abramoff and his associates and clients, including American Indian tribes, between 2001 and 2004. According to Bloomberg news service, 201 of those members are still in Congress; Republicans received 64 percent of that money.

Since the whiff of scandal began to emerge around Abramoff, members have been rushing to return his contributions or donate the money to charity. But not everyone who ever took Abramoff-related money or perks is guilty of wrongdoing.

[Malkin:] But principled conservatives must call Abramoff what he is--a sleazebag plain and simple, as I've noted before--and condemn his criminal activities unequivocally.

Let's see how this plays out. I hope the investigation is massive (as they suggest), and equally careful. Let's see who saw through him, who stood up to him, who came to their senses and when.

This is going to become such a huge mixture of soap opera plots and corruption sprinkled with a couple mini-media scandals, all folded in on itself again and again.

Sounds about right to me, given today's political hysteria and hyperbole.

Cap'n Ed: "The corruption will have followed both [parties] in proportion to their power. Expect to see enough takedowns to thoroughly embarrass everyone."

Update 1/4: Powerline: "The information that was filed yesterday ... seems surprisingly thin. ... Time will tell how much ... is smoke, and how much is fire."