The author of drewspeak describes his days trolling USENET. Emphasis mine:

... the truth is, I was once an Internet troll, “back in the day” when I was an angry, atheist teenager on an AOL account. You know the type, I’m sure. Let me tell you: I trolled pretty hard. That’s all behind me, of course, and I don’t regret having outgrown the adrenaline rush of just rolling out and pissing off some Christian group, a WebTV board or a wrestling forum.

I appreciate the inside look. I commend him, too, for coming out of it.

I do not necessarily wish to excessively extol the virtues and powers of the Internet troll; these persons are typically not quite so epic as they are a nuisance. They are readily the bane of many close-knit Internet communities, descending like a swarm of ethereal locusts from cursed heaven - a fantasy plague of boors eradicating established social orders with malice and confusion.

"Malice and confusion" are a bit more than "a nuisance," in my humble opinion. And I think he agrees, as he looks at the vile trolling done to Kathy Sierra.

Horrifying, sociopath behavior like this constitutes one of the potentialities of the troll: the individual who is truly vicious, twisted, obsessed and angry, an ugly, anonymous, dark-minded person with a hellbound will to do you pain. I imagine this image might stir some atavistic archetype: is this not the type of creature nightmares are made of? This, certainly, should be seen as an aspect of the devil.

Interesting, coming from a (former?) atheist.

But I see trolling (as with much of human nature) as degrees of the same dysfunction. If "malice and confusion" are cool, why not maximum malice and confusion? (Putting it another way, if Ozzy was cool for biting heads off bats, isn't the next more gruesome act--Rob Zombie, Marilyn Manson--even cooler?)

That wasn’t my only tactic; demolishing arguments and ideas I didn’t find to my preference my diluting debates with a veritable army of meatpuppets, sock-puppets and multiple identites was one way to go about things; another one of my trademark techniques was using a “false flag” and using it to devalue standpoints I disagreed with. For years, I had an “alternate persona” as a right-wing Christian that I trolled out to attack anime, video game, sci-fi fantasy, and political groups - this was enough to shift otherwise rational people into spewing their bile and vitriol against the Christian right, just as was intended.

I'd love to omnisciently go back and follow each reader, how he skewed their view of Christians (and everything), and how that deception propagated. And for that matter, what deception (perhaps from other trolls?) influenced his thinking?

The defenders of trolling make some revealing comments. Kyle says:

The problem is, it's completely self-referential. Completely relative. The troll who harrasses Kathy Sierra considers himself the "good" troll, better than the wimpy half-trolls like Kyle who won't go all the way. And if he doubts it, he just has to ask himself.

Another thought: The trollers' motto: "I'm exactly as emotionally and psychologically healthy as I decide I am. My techniques (deception, confusion, malice) are exactly as appropriate as I decide they are." 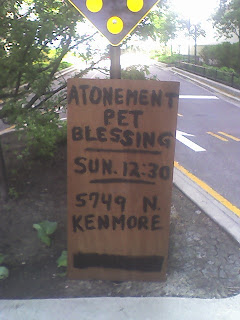 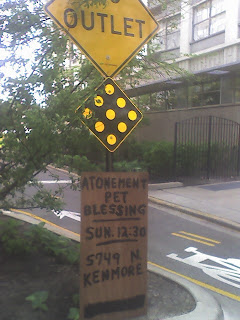 I saw this at the entrance to Foster beach. I've never heard of a Pet Blessing ceremony.

I didn't make it to the event.

Atonement is the Church of the Atonement at that address. And, apparently, the pet blessing service was a hit (photos here).

I want to be open-minded, but I think they're straying a bit from the Scripture.

The Daily Show makes light of it, but it's an incredibly vile trend. The latest rage in messed up urban culture. "Stop snitching." Stay quiet about the crimes you see, even those perpetrated on you.

America's Most Wanted calls it "Perpetuating A Culture Of Violence:"

From Louisville to Boston, there is a culture of intimidation and fear pervading crime-infested inner cities, and it's being perpetuated through an unlikely source: fashion. An increasingly popular slogan --"Stop Snitching"-- is being slapped across T-shirts everywhere, encouraging silence and reinforcing a cycle of violence.

It's the next step in losing perspective: trust the perpetrators, distrust the police. Harm yourself to stick it to the Man.

It's hip-hop poisoning its own fans for a buck.

What's the reward? To be cool? Talk about a slave to fashion. (Of course, more crime is the real reward.)

1,914 attempts at indiscriminate civilian mass murder as of the end of 2006. Palestinian militants attempting to mass-murder Israelis.

The visual: this video shows rockets by the pile. 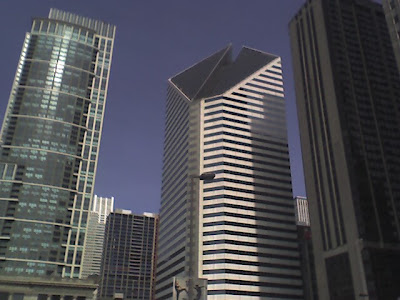 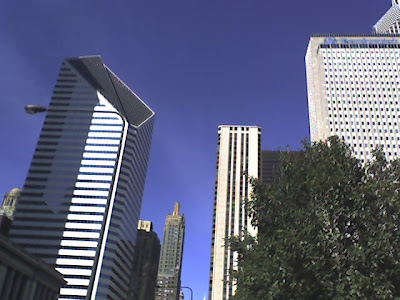 Two views of the Smurfit-Stone Building, one of the most distinctive features of Chicago's skyline.

This is the view from Millenium Park (Randolph and Michigan).

The first was taken this week. The second last fall. I love the bold blue sky in each.

The plot at the Huda Girls' school in Tarmiya was a "sophisticated and premeditated attempt to inflict massive casualties on our most innocent victims," military spokesman Maj. Gen. William Caldwell said.

The military suspects the plot was the work of al Qaeda, because of its nature and sophistication ...

"It was truly just an incredibly ugly, dirty kind of vicious killing that would have gone on here," Caldwell said.

Sickening evil. Maybe, instead of turning Iraq over to this evil, we should destroy it every chance we get.