China has a long-standing cultural preference for boys: they stay home, inheriting from the parents and taking care of them in their old age. But China's repressive one-child policy has turned this into the murder of millions of Chinese girls.

Do the math: tens of thousands of girls adopted out to other countries. Perhaps hundreds of thousands abandoned to orphanages. That still leaves millions statistically unaccounted for. Many of those are dead through abortion, though technically it's illegal for a couple to learn their baby's gender. I wonder how many are killed after they're born.

The documentary took a very upbeat tone, following parents and focusing on their joy. It avoided criticizing the Chinese government directly.

I'm baffled by all the tip-toeing around this brutal Chinese government. Who will call it what it is? Mass murder as a direct result of government policy. Keep in mind that this government descends from mass-murdering Mao. (The documentary, to its credit, points out the linkage, though not Mao's bloodbath.)

Some say this imbalance could lead to men organizing an army, channeling their energies destructively. Though that's possible, it seems more likely that its destructive outworkings would be less organized, like crime and addiction. The strong cultural preference for boys is to keep them at home, too, taking care of their parents in their old age.

Not forgiving any perpetrator's actions, but the continuing strong preference for boys as parents' "social security" says something about people's confidence in their government's care.

Well, the Da Vinci Code movie is out. I'll get around to seeing it eventually.

A few protests, but mostly debunking. Some debating, too. 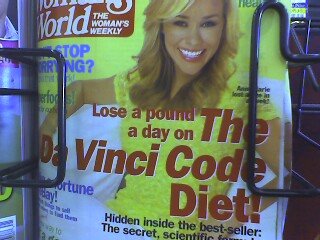 "The secret, scientific formula...." You gotta be kidding. But maybe a fad theology deserves a fad companion diet. Scoop up the gullible.

Forget it. Enjoy the movie.

Venezuela President Hugo Chavez said he could seek "indefinite" re-election through a referendum if the opposition boycotts upcoming presidential elections.

Chavez made the remark late Friday, saying if the opposition pulls out of the Dec. 3 vote or makes false claims of electoral fraud to the Organization of American States, "I would call a national referendum to have the people decide if I can continue here indefinitely or if I have to go after six years in 2014."

So if people claim he's a dictator, he'll just become one.

Wow. And to think he bought the American left's silence allegiance for a mere $10 million. (I know, I know, he didn't really have to pay a dime for it.)

McGovern seems to have gotten his out-of-context Rumsfeld quote from ThinkProgress' Iraq timeline, which I scrutinized here.

SEC. RUMSFELD: Not at all. If you think -- let me take that, both pieces -- the area in the south and the west and the north that coalition forces control is substantial. It happens not to be the area where weapons of mass destruction were dispersed. We know where they are. They're in the area around Tikrit and Baghdad and east, west, south and north somewhat.

Second, the [audio glitch] facilities, there are dozens of them, it's a large geographic area. ... The idea, from your question, that you can attack that place and exploit it and find out what's there in fifteen minutes.

I would also add, we saw from the air that there were dozens of trucks that went into that facility after the existence of it became public in the press and they moved things out. They dispersed them and took them away. So there may be nothing left. I don't know that. But it's way too soon to know. The exploitation is just starting.

Not being a mind-reader, I don't know if McGovern spoke from ignorance, dishonesty, misplaced trust in ThinkProgress, his own poor reading skills, or what.

P.S.: CBS News correspondent David Marin, one of the story's authors, could have looked into it himself.

Update: We've seen this guy before.

Of the top 14 oil exporters, only one is a well-established liberal democracy — Norway. Two others have recently made a transition to democracy — Mexico and Nigeria. Iraq is trying to follow in their footsteps. That's it. Every other major oil exporter is a dictatorship — and the run-up in oil prices has been a tremendous boon to them. ...

Of course, if we seized the Saudi and Iranian oil fields and ran the pumps full speed, oil prices would plummet, dictators would be broke, and poor nations would benefit from cheap energy. But we'd be called imperialist oppressors, then.

UPDATE: Various people (with various degrees of enthusiasm) see the above as a call for invasion. It was, rather, a comment on the vacuity of the "imperialist oppressors" language. Though I was probably wrong there anyway: If we really were imperialist oppressors, the critics would be sucking up.

But just to troll a bit more, I do think that seizing Saudi and Iranian oil would be entirely morally justifiable on terms usually approved of by the left: They didn't earn it, they inherited it (it's like the Estate Tax writ large!). They're extracting huge profits for fatcats at the expense of the poor. They're racist, sexist, homophobic theocrats! (Literally!) Surely if it's ever permissible to redistibute wealth by force, this is the case. Right?

Zing! Read it all.

The lynch mob hounds oil companies, which get a relatively small cut, and actually work for it. OPEC, a monopoly, is blatantly illegal by US anti-trust laws, but gets a free pass.

Ken Cohen, VP of Public Affairs for ExxonMobil: "we need to do a better job about explaining to people just how we go about making out money and that we earned it." He must have read this post!