Cheney's clarity and backbone vs. Pelosi's feel-good rhetoric and dodging:

Vice President Dick Cheney refused Friday to take back his charge that House Speaker Nancy Pelosi's opposition to President Bush's Iraq war buildup is playing into the hands of the al-Qaida terrorist network.

"If you're going to advocate a course of action that basically is withdrawal of our forces from Iraq, then you don't get to just do the fun part of that, that says, 'We'll, we're going to get out,' and appeal to your constituents on that basis," Cheney said.

"You also have to be accountable for the results. What are the consequences of that? What happens if we withdraw from Iraq?," he said. "And the point I made and I'll make it again is that al-Qaida functions on the basis that they think they can break our will. That's their fundamental underlying strategy, that if they can kill enough Americans or cause enough havoc, create enough chaos in Iraq, then we'll quit and go home. And my statement was that if we adopt the Pelosi policy, that then we will validate the strategy of al-Qaida. I said it and I meant it."

Asked if he was willing to take back his criticism of Pelosi, Cheney replied, "I'm not backing down."

Douglas Feith, undersecretary of Defense, after 9/11 reanalyzed the raw intel regarding the relationship between Iraq and al Qaida. Recently, the DoD's Inspector General issued a report critical of Feith. Though not violating laws or policies, it considered his office's activities "inappropriate."

The Washington Post confused Democrat Carl Levin's quotes with the report itself and had to heavily correct it.

Best summary: "They Were For Dissent And Alternative Analysis Before They Were Against It."

So tomorrow, the Pentagon's own Inspector General will present a report to the Senate Armed Services Committee on whether--I'm not kidding--it was illegal for the Defense Department to independently analyze the data gathered by the intelligence agencies.

Now the report itself gets a rebuttal. Hugh Hewitt tracks it (caution: long). Via Powerline:

The Under Secretary notes:

It is puzzling...that the Draft Report fails to discuss some of the most authoritative articulations of the [intelligence community's] analysis on Iraq and al Qaeda--the vetted, coordinated correspondence and testimony by the [Director of Central Intelligence] himself to the Congress.

So the Under Secretary retrieves from the memory hole what the CIA said about contacts between Iraq and al Qaeda during 2002 and 2003. On October 7, 2002, the Director of Central Intelligence wrote to Congress:

*Our understanding of the relationship between Iraq and al Qaida is evolving and is based on sources of varying reliability. Some of the information we have received comes from detainees, including some of high rank.

*We have solid reporting of senior level contacts between Iraq and al Qaida going back a decade.

*Since Operation Enduring Freedom, we have solid evidence of the presence in Iraq of al Qaida members, including some that have been in Baghdad.

*We have credible reporting that al Qaida leaders sought contacts in Iraq who could help them acquire WMD capabilities. The reporting also stated that Iraq has provided training to al Qaida members in the areas of poisons and gases and making conventional bombs.

*Iraq's increasing support to extremist Palestinians, coupled with growing indications of a relationship with al Qaida, suggest that Baghdad's links to terrorists will increase, even absent military action.

In a statement to the Senate Select Committee on Intelligence on February 11, 2003, the Director of Central Intelligence stated:

Iraq has in the past provided training in document forgery and bomb-making to al Qaida. It also provided training in poisons and gases to two al Qaida associates; one of these associates characterized the relationship he forged with Iraqi officials as successful. Mr. Chairman, this information is based on a sold foundation of intelligence. It comes to us from credible and reliable sources.

At a Senate Armed Services Committee hearing on February 12, 2003, the DCI stated:

[W]e also know from very reliable information that there's been some transfer of training in chemical and biologicals [sic] from the Iraqis to al Qaeda.

I saw these and had to laugh. Finally they're marketing Valentines Day to guys! 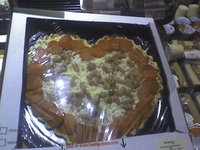 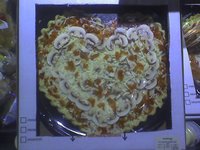 Yes, those are heart-shaped pizzas! 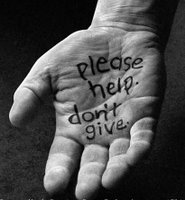 I saw this on a bus-stop brochure in Denver. It got my attention. Their web-site is GiveABetterWay.org.

Hats off to these folks, trying to make a real difference.

When I first came to Chicago, I was out and about more often, and approached by panhandlers. I had a little time on my hands, so I tried to verify the stories I was told.

"My car broke down a couple blocks over: could I get a couple bucks for gas?"

Every single one lied to me. Maybe a dozen or so of these situations aren't statistically significant. But organizations like this (and Evanston's) show the same trend.