But here's a much better analysis of the original memo, with the full translation.
By The Scrutinator @ 11:46 PM  ::  0 comments 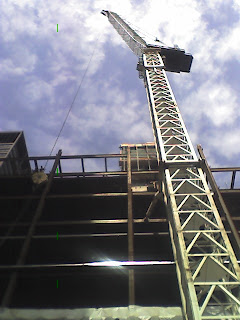 A crane punctures the sky in downtown Chicago.

This 419 scam made it through my junk-mail filters. It has a couple unique features: an Iraqi general, and a bank in Hong Kong. I'd mess with them, but who has the time? So instead I'll just post it here--of course, "endeavor[ing] to observe atmost discretion in all matters concerning this issue."

Subject: Compliments of the Day

I am Mr. Ming Yang director of operations of the Hang Seng Bank Ltd.
I have an obscured business suggestion for you.Before the U.S and Iraqi war our client Gen. Aadel Akgaal Bastaan who was with the Iraqi forces and also businessman made a numbered fixed deposit for 18 calendar months, with a value of Twenty Four million Five Hundred Thousand United State Dollars only in my branch.Upon maturity several notices was sent to him, even during the war which began in 2003.Again after the war another notification was sent and still no response came from him. We later find out that the General along with his wife and only daughter had been killed during the war in a bomb blast that hit their home.

After further investigation it was also discovered that Gen. Aadel Akgaal Bastaan did not declare any next of kin in his official papers including the paper work of his bank deposit.
And he also confided in me the last time he was at my office that no one except me knew of his deposit in my bank So, Twenty Four million Five Hundred Thousand United State Dollars is still lying in my bank and no one will ever come forward to claim it.What bothers me most is that according to the laws of my country at the expiration 5 years the funds will revert to the ownership of the Hong Kong Government if nobody applies to claim the funds. Against this backdrop,my suggestion to you is that I will like you as a foreigner to stand as the next of kin to Gen. Aadel Akgaal Bastaan so that you will be able to receive his funds.
MODALITIES:
I want you to know that I have had everything planned out so that we shall come out successful. I have an attorney that will prepare the necessary document that will back you up as the next of kin to Gen.Aadel Akgaal Bastaan, all that is required from you at this stage is for you to provide me with your Full Names and Address so that the attorney can commence his job. After you have been made the next of kin, the attorney will also fill in for claims on your behalf and secure the necessary approval and of probate in your favour for the move of the funds to an account that will be provided by you.There is no risk involved at all in this matter,as we are going to adopt a legalized method and the attorney will prepare all the necessary documents.
Please endeavor to observe atmost discretion in all matters concerning this issue. Once the funds have been transferred to your nominated bank account we shall then share in the ratio of 70% for me, 25% for you. Should you be interested please reply to me urgently via this email address:redacted@yahoo.com.hk so that i can forward more details to you.

Your earliest response to this letter will be appreciated.
Kind Regards,
Mr. Ming Yang
(Director of Operations HSB Hong Kong)

Came across another set of Blues Brothers, and had to add it to my growing collection.

I was in Joliet (a bit south of Chicago) and found them on an ice cream place's roof. 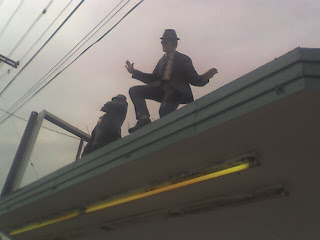 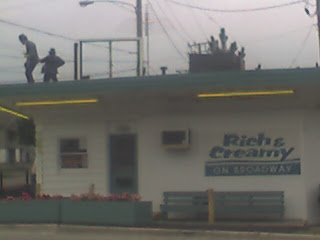 I think the Blues Brothers movie was about them making their way from Joliet to Chicago. (A much less eventful drive for me.)

It's rare that a Today Show piece catches my eye. This one did: Alek Wek, a British super-model, is from southern Sudan.

She talks about the Muslim slave trade--a topic that hasn't gotten nearly the attention it deserves.

In the eighteenth and nineteenth centuries, slave traders came through this territory, capturing Dinkas and others and taking them north to be sold in the Arab countries. It is said that even in the twenty-first century, children from the south have been enslaved and sold.

The Muslim slave trade redefined brutality. Captured slaves were marched across the desert. Most died in transit. According to African Echo:

While the mortality rate for slaves being transported across the Atlantic was as high as 10%, the percentage of slaves dying in transit in the Transsahara and East African slave trade was between 80 and 90%! ...

While most slaves who went to the Americas could marry and have families, most of the male slaves destined for the Middle East were castrated, and most of the children born to the women were killed at birth. ...

While Christian Reformers spearheaded the antislavery abolitionist movements in Europe and North America, and Great Britain mobilized her Navy, throughout most of the 19th Century, to intercept slave ships and set the captives free, there was no comparable opposition to slavery within the Muslim world.

Alek Wek's story brings to light a point I didn't know: the north and south parts of Sudan were united due to pressure from the Islamic north. It was their plan to brutalize south Sudan right from the beginning. Emphasis mine:

The main thing to understand about my country is that it has always been split between the Islamic Arab north and the animist and Christian south. They don't ever seem to mix that well and the north has always tried to dominate the south. The British, who ruled Sudan from the late nineteenth century until the 1950s, governed the north and south separately, but in the 1940s, just before independence, the British gave in to pressure from the Islamic leaders in the north to unite the country. The northern government then proceeded to impose Islamic culture on the southern people, most of whom weren't Muslim or Arab.

Those who portray this as a consequence of British imperialism are just wrong. Truth is, British colonialism/imperialism helped southern Sudan as long as it lasted.

Rep. Lynn Woolsey, California Democrat and co-founder of the antiwar Out of Iraq Caucus:

We need bolder steps from the Democrats[.] The people of this country are waiting for some leadership — some bold leadership — from the people that they elected to be the majority of the House and the Senate.

Thus, you elected the Democratic Party for this purpose, but the Democrats haven't made a move worth mentioning. On the contrary, ...