Perhaps Americans will slowly wake up to the fact that the sectarian violence they lament was not a spontaneous result of the removal of Saddam Hussein. Instead, it was deliberately engineered by the very terrorist organization that attacked us on 9/11.You can pretend that it is a different al Qaeda if it makes you feel better (many will do that as they awaken to what is going on), but I'm not sure why you would. Denial is irrational, even if it is understandable.

Awareness of al Qaeda is slowly growing in the minds of mainstream media reporters who have been hamstrung by the civil war schema that they simply cannot get out of their heads. Even so, there is not the slightest mention of the fact that al Qaeda was probably behind yesterday's bombing. Millions upon millions of readers of countless stories like this all over the world will read about that bombing and then shake their heads at the escalating "civil war" in Iraq.

Chicago Sight: Blues Brothers get around 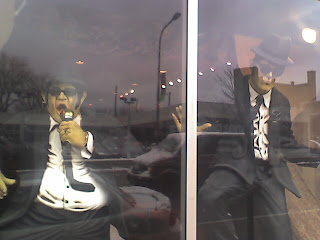 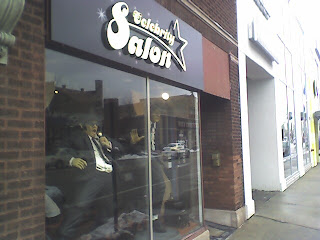 Another sighting of the Blues Brothers, this time at the Celebrity Salon in Evanston. These same, um, statues are at Midway Airport.

Three months after the United States successfully pressed the United Nations to impose strict sanctions on North Korea because of the country’s nuclear test, Bush administration officials allowed Ethiopia to complete a secret arms purchase from the North, in what appears to be a violation of the restrictions, according to senior American officials.

Not good. But let's look closer.

Between the lines. We see that the U.N. is unable to "impose" anything. Like, for instance, blocking this shipment. It's up to the member states, the coalition of the willing.

The situation. Ethiopia asked that this shipment be grandfathered. We're pressuring them to quit buying from North Korea, and they seem responsive. One American official, apparently in the know, is confident that "the issue had been handled properly."

Ethiopia approached us, not trying to hide it. Buying stuff at super-low margin puts less money in Kim Jong Il's pocket than just giving him cash.

In paragraph 1 we learn that it "appears to be a violation of the restrictions" because (from paragraph 9) it "was probably carrying tank parts and other military equipment." But in paragraph 18 we learn that China and Russia blocked the U.N. resolution from requiring inspections of ships leaving North Korea. Thanks to Russia and China, perhaps we'll never know.

Gordon and Mazzetti patiently instruct us how to interpret this:

But the arms deal is an example of the compromises that result from the clash of two foreign policy absolutes: the Bush administration’s commitment to fighting Islamic radicalism and its effort to starve the North Korean government of money it could use to build up its nuclear weapons program.

So we're told that the the Bush administration is absolutist while showing us evidence to the contrary.

Idle speculation. Under a Kerry Presidency, wouldn't this be called nuance? A difficult trade-off? Being patient vs. demanding with an ally? But under a Kerry presidency, the sanctions probably wouldn't be there to begin with: that would make the world a better place.

It recalls the agonizing trade-offs we made during the cold war, making friends with unsavory characters to keep monsters like Stalin and Mao at bay. And like the left in the cold war, we see Stalinist North Korea mentioned only in passing.

Looks like it was the State Department advising the Bush Administration to allow it:

“Never underestimate the strength of ‘clientitis’ at the State Department,” said Mr. Bolton, using Washington jargon for a situation in which State Department officials are deemed to be overly sympathetic to the countries they conduct diplomacy with.

So (it seems) the Bush administration took the State Department's advice. I thought they didn't listen to anyone?

Any battle tanks, armoured combat vehicles, large calibre artillery systems, combat aircraft, attack helicopters, warships, missiles or missile systems as defined for the purpose of the United Nations Register on Conventional Arms, or related materiel including spare parts, or items as determined by the Security Council or the Committee established by paragraph 12 below (the Committee);

Small arms and ammunition aren't on this list (oddly), so the shipment might not have violated it.

Another blatant, not-so-secret violation: apparently today we just unfroze some of North Korea's funds. That's a clear violation of 1718's section 8.(d), by the way (and a huge disappointment to me). But will the Times report it that way?

Update, 4/14: The more I think and read, the more I put our lax treatment of North Korea sqarely in the "Failure" category, but I stand by my original comments.

Iranian intelligence operatives have been training Iraqi fighters inside Iran on how to use and assemble deadly roadside bombs known as EFPs, the U.S. military spokesman said Wednesday.

Commanders of a splinter group inside the Shiite Mahdi Army militia have told The Associated Press that there are as many as 4,000 members of their organization that were trained in Iran and that they have stockpiles of EFPs, a weapon that causes great uneasiness among U.S. forces here because they penetrate heavily armored vehicles.

Note that the headline is still tentative: "Iran May Be Helping Iraqis Build Bombs" (emphasis mine)

Old news in the blogosphere, but good that it's getting more exposure. 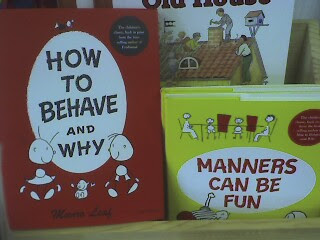 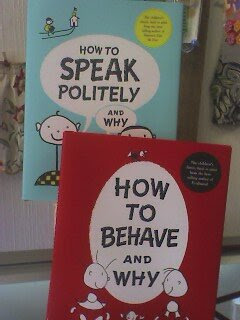 These books seem relevant to current discussions about blogger harassment and civility.

They're from Chicago's Sweden Shop on Foster Avenue (their picture caught these same books). See reviews here and here.

Woe be it for this blog to defend the country's foolish watchlist system, but after having spent more than four years reporting on watchlists, filing Freedom of Information Act requests, and talking with persons flagged by the lists, I have never seen a single case of a person being put on the list for activities protected by the First Amendment. Feel free to drop any proof you might have via email or in the comments.
[...]
I'm open to any evidence that the government has watchlisted American citizens for exercising their Constitutional rights, but I've never seen it.

Not one? But what about the crushing jackboot of Bushitler's minions?