I was on campus at Depaul the other day, and saw posters proclaiming very noble campus ideals. The first said hate-speech has no place there. The second said they embraced diversity.

Wonderful. Except that those in charge can dispose of anything they really disagree with by casting it as hate speech.

George Will says it better than I could:

And it was predictable that speech suppression would become an instrument of cultural combat, used to settle ideological scores and advance political agendas by silencing adversaries.

Here's the "hate speech" he cites:

Marriage is the foundation of the natural family and sustains family values.

With every bit of authority comes the ability--and willingness--to abuse it. Speech codes included.

I love Todd Agnew's music. I love his voice.

In his song, My Jesus, I appreciate his challenging my image of Jesus.

But I kind of have a problem with this:

I'd like to ask his church's leaders if they'd agree with that.

Or maybe he's talking about "my church" as in, you know, my church, not his church. But that means he's asserting things about a church he doesn't know. Seems pretty unfair.

A lot of churches need reproof for a lot of things, mine included. But reproof is specific and constructive, not assertions like this. This seems more like a cheap-shot than a reproof.

I want--need--to have my conscience pricked. But I don't think church-bashing is the way to do it.

Hopefully, everybody but me just goes away thinking, "Jesus matters more than my church's (or my) carpet." (He does matter more.)

The distinctive round towers of the Marina City Parking Garage. 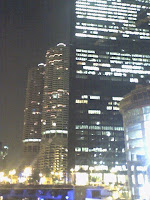 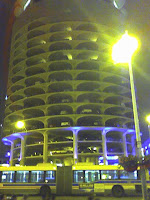 The first dozen or so levels are parking, with (I think) condos above.

They were just featured in some TV ad. A car races through one then crashes out and falls into the river.

Then we will no longer be infants, tossed back and forth by the waves, and blown here and there by every wind of teaching and by the cunning and craftiness of men in their deceitful scheming. Instead, speaking the truth in love, we will in all things grow up into him who is the Head, that is, Christ.