With Hurricane Katrina, one might concede that the chaos played a role in all the astonishingly false reporting that went on.

But now, sans natural disaster, we have the Jena 6. Like Katrina, events that occurred on U.S. soil, recently, reported by people we're expected to trust. And the press generally got it disgracefully wrong.

The media got most of the basics wrong. In fact, I have never before witnessed such a disgrace in professional journalism. Myths replaced facts, and journalists abdicated their solemn duty to investigate every claim because they were seduced by a powerfully appealing but false narrative of racial injustice. ...

The reason the Jena cases have been propelled into the world spotlight is two-fold: First, because local officials did not speak publicly early on about the true events of the past year, the media simply formed their stories based on one-side's statements – the Jena 6. Second, the media were downright lazy in their efforts to find the truth. Often, they simply reported what they'd read on blogs, which expressed only one side of the issue.

The real story of Jena and the Jena 6 is quite different from what the national media presented. It's time to set the record straight.

Hats Off to Bill Cosby

Hats off to Bill Cosby, Dr. Alvin Poussaint, and the New York Times' Bob Herbert for giving voice to some "brutal truths:"

Mr. Cosby ... has spent the last few years hammering home some brutal truths about self-destructive behavior within the African-American community. ...

For three years, Mr. Cosby and Dr. Poussaint have been traveling the country, meeting with as many people as possible to explore the problems facing the black community.

There is a sense of deep sadness and loss — grief — evident in both men over the tragedy that has befallen so many blacks in America. ...

Speaking about the epidemic of fatherlessness in black families, Mr. Cosby imagined a young fatherless child thinking: “Somewhere in my life a person called my father has not shown up, and I feel very sad about this because I don’t know if I’m ugly — I don’t know what the reason is.”

Dr. Poussaint, referring to boys who get into trouble, added: “I think a lot of these males kind of have a father hunger and actually grieve that they don’t have a father. And I think later a lot of that turns into anger. ‘Why aren’t you with me? Why don’t you care about me?’ ”

The absence of fathers, and the resultant feelings of abandonment felt by boys and girls, inevitably affect the children’s sense of self-worth, he said.

Their book is here.

Who's in the bubble?

"Still, if military folks are starting to think [the war is lost] ... and so does the public and congress and the media ... Well, who's left? Only the fanatical or delusional!"

Or both. [Pan to the Whitehouse in a bubble.]

The popular uprising against al-Qa'eda by residents of Anbar Province turned former enemies into American allies earlier this year. The result was a dramatic restoration of stability across Iraq's Sunni heartland.
...
In the advanced field combat hospitals run by the Navy in Anbar province, there is suddenly nothing to do. Equipped to handle sudden rushes of dozens of gravely injured troops, the hospitals are empty.

Who's in the bubble?

10/14: Said another way, Who's the fanatical or delusional? 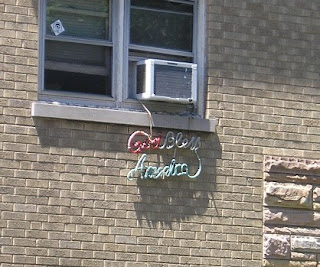 [H]ere's the problem I have all too often with the "dissent is the highest form of patriotism" line.
...
[I]t's a very subjective standard. You're dissenting on whatever the h*** problem is your own hobby horse. Feminist A is upset about the state of women and is patriotically "dissenting"; Klansman B is upset about the state of white folk, and in his mind, he's equally patriotic in his "dissent." There isn't a h*** of a lot in the "dissent" principle that can distinguish the two. ... The former may be offering a constructive criticism, the other clearly is proposing a destructive one, but both are equally ideological and neither is expressing a love of America qua America, but rather a love of what they think America should be.