I came across this post and couldn't stay silent. Red Letter Christians: Whose Death Does God Cheer?

While I agree with much of what the author says, the side-bar juxtaposition speaks volumes. 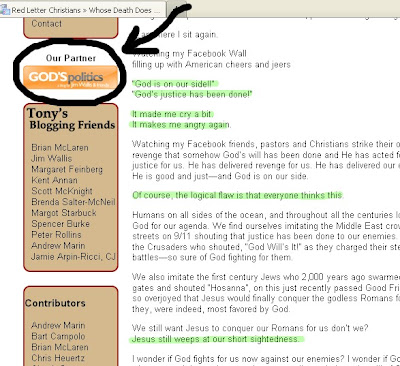 I haven't heard a single Christian speak words like he relays, though I'm sure some do.

I believe it's wrong for a Christian to indulge hatred, even toward Osama bin Laden.

But one who "despises a vile person" seems to please God. I won't claim to know exactly what that means.

I believe there is such a thing as justice: it's completely different than hatred, and is even fundamental to God's character. Rejecting its existence or mis-labeling it as hatred distorts His image.

I believe justice was done.

Update: There's also the notion that he's been stopped from committing more evil--the same as any apprehended criminal. Should one feel happy about that? I say yes, and go so far as to say that's a very unselfish happiness, since (I think) I personally am pretty unlikely to be his next victim.