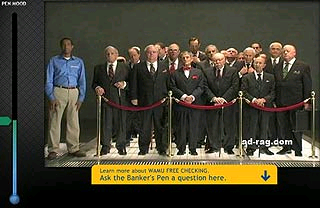 Seen the Washington Mutual Bank (WaMu) ads? A pen full of stodgy bank executives, all white males (though later ads have one white woman and a black man among them). Amusing, but they ooze with leftist bigotry.

With the visuals, a caricature requires you to put words in others' mouths: E.g., "Exactly how does that help the rich get richer?" (from WaMu's own press release.)

I'm sure they hold that same standard regarding African-Americans or Muslims. Riiiiight.

Also from the Sacrimento Bee:

The manipulative: Of course, Washington Mutual is a major banking institution with just as many corporate fat cats as any other financial firm (it was announced Wednesday that WaMu laid off 1,400 workers in Washington and Florida). ...

In other words, in reality they're indistinguishable from those they caricature. Good perspective.

Sure, others do stereotypes: Geek Squad stereotypes computer guys as major geeks. But they're not so loaded and the geeks are the heroes. That works, in my opinion. Others caricature their competition as negatively as they can: not the most enlightening advertising, but I suppose they have that right.

Here's my point: think about a caricature that does offend you. (How about the Amos and Andy Show?) Think hard about the essence of your problem with it. Reject double standards. Where does that leave you? For me, it means that you can't distort things as you see fit. Distortions hinder understanding.

Full disclosure: I'm a white male, but I look and sound more like a Geek Squad guy than a stodgy old banker. (But let me double-check that with my wife.)

I'm a liberal Black female, and I find those commercials racist as well. And I'm offended that you associate this sort of humor with Democrats. Not everything rife with depravity comes from the left side of the aisle. Decency, intelligence, and morality are not confined by those bounds.

Thanks for taking the time to read and comment.

I agree with you: Not everything rife with depravity comes from the left side of the aisle. Decency, intelligence, and morality are not confined by those bounds.

I consider it leftist because it seems (to me) to fit the whole Marxist "bourgeois oppression" theme (i.e., rich bankers are out to get us), though it tones it down for public consumption.

Marxism is leftist, thought perhaps much further left than you consider yourself.

I thought the ads are just goofy. You've got to have your undies twisted up pretty tight to view these ads as "racist". But then again, I guess that's just part of being a liberal.

Let the ad guys have fun wasting WaMu's ad budget. They all do it and NO ONE gets hurt.

I think the Wamu commercials are not only racially biased but also age biased. They portray middle-aged white men as fearful, hen-pecked, over weight and ineffectual. Did I leave anything out? You have to wonder what kind of marketing person thought this was a good idea.

They are extremely racist. The one with the pen of the bankers' wives also bordered on anti-semitic as well (the women were all dressed/made up in gross charictiture like mike meyers middle-aged jewish character Linda Richman on Coffee Talk on SNL).

The real funny thing, though, is that WaMu's executive leadership is all middle-aged, all white and mostly male(10 men and 2 women).

They are a disgusting company on all fronts.

Ugh, I hate these ads. They're offending in so many ways. They're patronizing to blacks and youth: "Hey, we're so hip we changed our name to WaMu - you know, like FUBU. Yes, let's get jiggy with it. Oh, and give us your money." And they're so obviously insulting to whites and the traditional older generation. So THEY have made it a racist thing. And THAT is insulting. Do they figure that every black is a racist and will identify with this ad?

It is indeed a HIGHLY racist commercial. All one has to do to see if a situation is racist is reverse the roles...make the WaMu guy white, and all the bankers black. Would it appear racist then? Yes it would, and would invoke the rage of several outspoken high-profile "Reverends" that we all know.

Do you realize that there are MANY anti-white male ads on TV? Whenever someone needs to be portrayed as clueless, fat, old, out of it, asexual, unfashionable, unhip, a geek, etc it's 99% of the time a white male. For just one example, most of Verizon's cell phone TV ads portray white males negatively. I've been waiting for a long time for someone to pick up on this - "WaMu" is simply one of the more egregious examples.

As far as I know, no one has said it yet and so I will.

TV has become infested with commercials that have a hatred of bald men.

It appears a trend of genetic supremacy is starting up again, a modified rendition of Nazi Germany.

Why do I feel like someone is shoving me into a gas chamber?

Now we find WaMu was waist deep in subprime loans. So much for their new values.

I agree with anonymous before me! Add middle-aged father to the list! Every night after I watch "The Simpsons", "Family Guy", "Married With Children", "King of Queens", or any other sitcom involving a family, I end up crying myself to sleep at night over the fact that the TV industry can get away with characterizing us as "dim-witted" or overweight.

In all seriousness, is this comment thread a joke? The "stodgy old white man" has been a staple of executive parody for ages. Getting upset because they don't toss an African American in there is just as absurd as getting upset about the fact that there aren't any young men in there.

DOES ANYONE THINK IT IS IRONIC THAT WAMU FRESH BANKER ("Bill") IS SAVED BY THE OLDEST AND MOST TRADITIONAL BANKS IN J.P. MORGAN ("Crust White Guy").

Does this also foretold the similiar presidential election where Fresh Obama is going to fail, and be bailed out by traditional politicians

Wamu got what they deseved. These kind of racist commercials are getting old. It is time for white males to let their money do the talking. Do not spend your money at businesses that advertise in this fashion. Businesses that want to portray white males as out of touch, out of shape, nerdy, dumb, asexual, ect., do not deserve money from white male customers, period!

Also, get the word out. There are alot of people who don't even realize this is going on. When they start to open their eyes to this, it becomes apparent really quick how out of control it is.