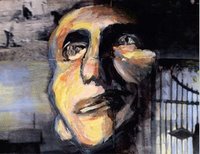 Hats off to the Chicago Public Library for making A Day in the Life of Ivan Denisovich their city-wide book to read for Spring 2006.

What Stalin perpetrated in the Soviet Union and her subjects is truly mind-numbing: deliberately murdering almost 62 million people. Behind that staggering statistic is an abyss of human suffering you can't comprehend, for both the victims and the survivors. This book gives you a sobering glimpse.

Hugh Hewitt credits this book for helping him see Communism for what it really was.